‘Nest Watch’ In The Garden

Last Spring I was captivated watching a pair of blackbirds nesting in the garden This year they are back with a new nest in the same hedge. As I didn’t want to disturb them I bought a nest box camera kit. 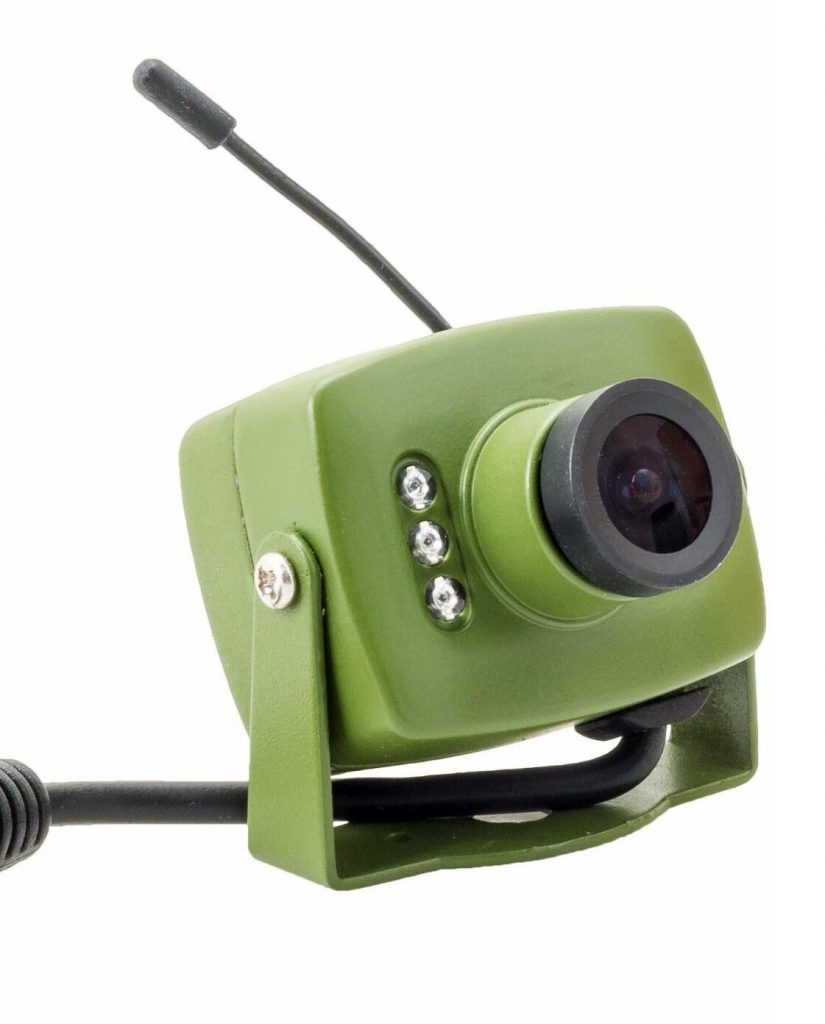 which has allowed me to follow their progress from a finished nest to the young birds vacating it. I opted for the wireless version but quickly discovered that interference became a serious problem when the receiver (attached to the tv), was more than just a few feet away. That was extremely frustrating, however, as the nest was extremely close to the kitchen, I relocated the tv to there and managed a good signal. Now, at £50 I couldn’t expect a miracle with image quality and had to make do with a slightly rough black & white image (painful to a photographer who strives for high quality!).  Once I had accepted that the camera was just a bit of fun, I settled into watching. The camera allowed me to choose my moments carefully to approach the nest and peer through the hedge. I used my compact camera for this job as it was much smaller to poke into a small gap, than a big dslr camera even if the image quality wasn’t quite as good. 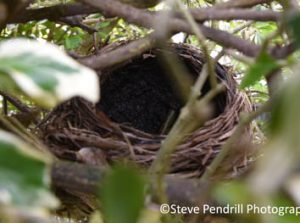 My first shot is of a nearly finished nest. I was untriaged as the mother bird carefully lines the nest with a layer of mud, presumably to strengthen it.

A few days later, by 21st March, the beautifully made nest is complete and lined with a softer layer of plant material and a couple of cable ties (this bird ain’t daft!). Remarkable that the twigs and dry grass are so intricately woven. Not bad when all you have is a short beak! 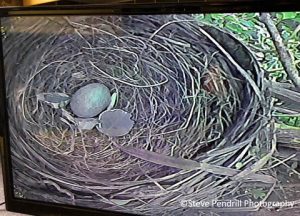 Four days later and the first egg is laid. These are screenshots from the tv and illustrates the limited quality of the nest camera. 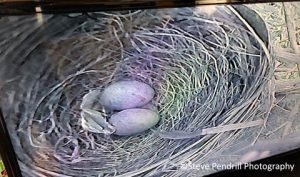 And then there were three!

The mother bird didn’t seem at all troubled by leaving the eggs for quite some time, presumably to stock up on food for herself in lieu of leaner times ahead. As I read, the eggs are laid one each day until all are laid and the incubation begins. 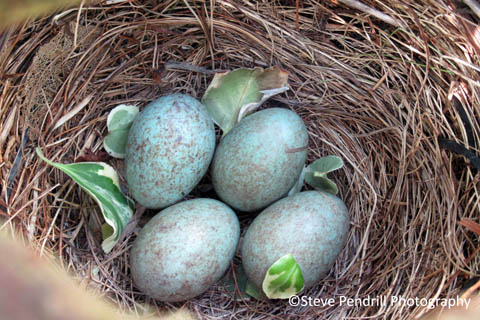 The nest has it’s quota of eggs.

The four blue/green speckled eggs in the nest look look adorable, don’t they? Just a few days before Easter and apart from the leaves I accidentally knocked into the nest (which the mother bird on returning duly consumed), the nest looks great. I noticed that the blackbird was fastidious about keeping the nest clean. Not just removing any stray leaves, she removed (and ate, yuck) the chick’s poo too, which I observed via the nest cam that they dutifully produced when she poked their rears. 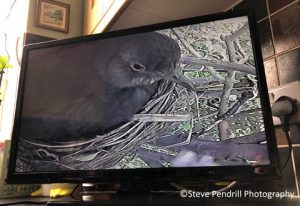 Kitchen view of the nest. 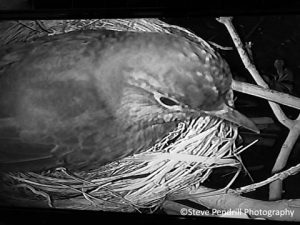 At night, the infrared light on the camera was invisible to the bird but allowed me to miss nothing day or night. 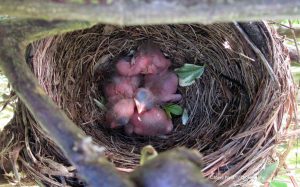 All four eggs have hatched.

A day later and all four eggs had successfully hatched and the mother bird was kept very busy feeding and keeping them warm. 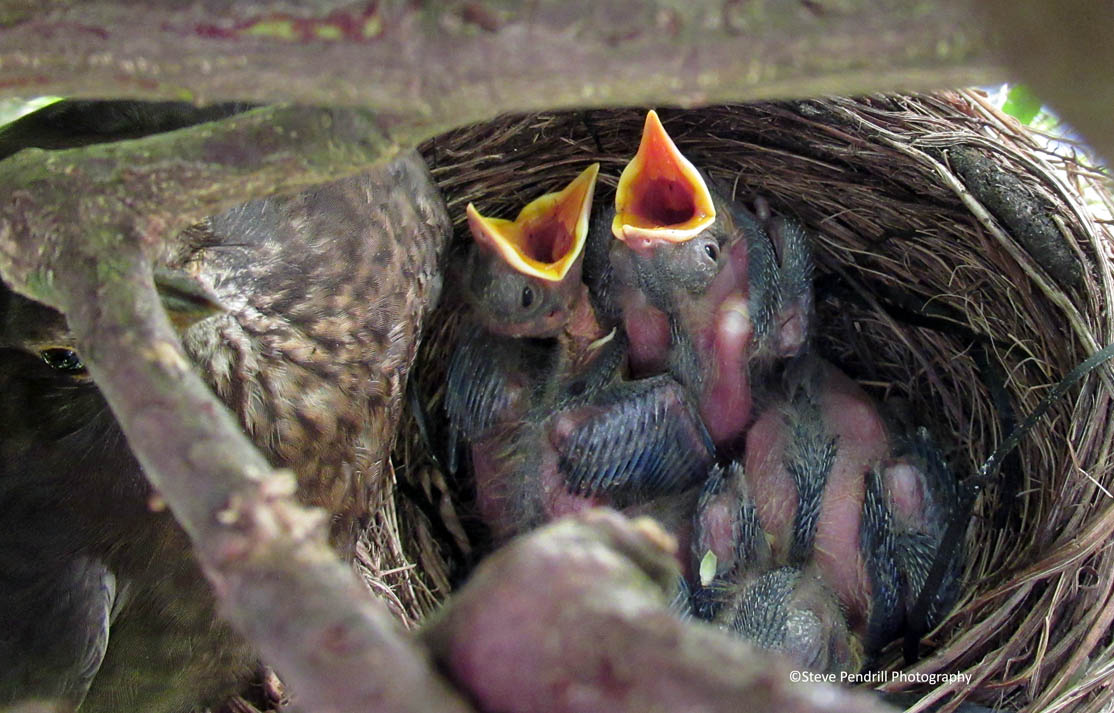 hungry birds (and the mother catches me peeping!).

Six days on and the birds were growing at an incredible rate, had opened their eyes and were hungrier than ever! 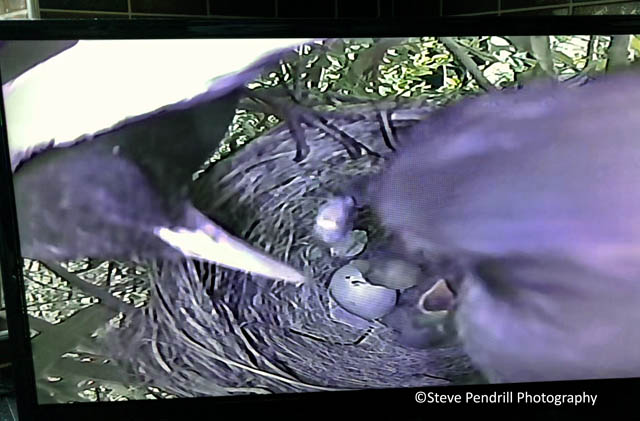 A rare nest cam shot of both birds on feeding duty at the nest. 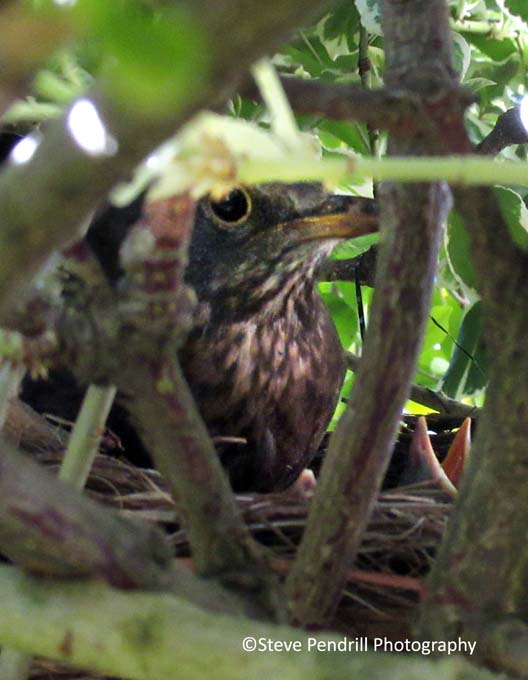 Resting between feeds on the nest. 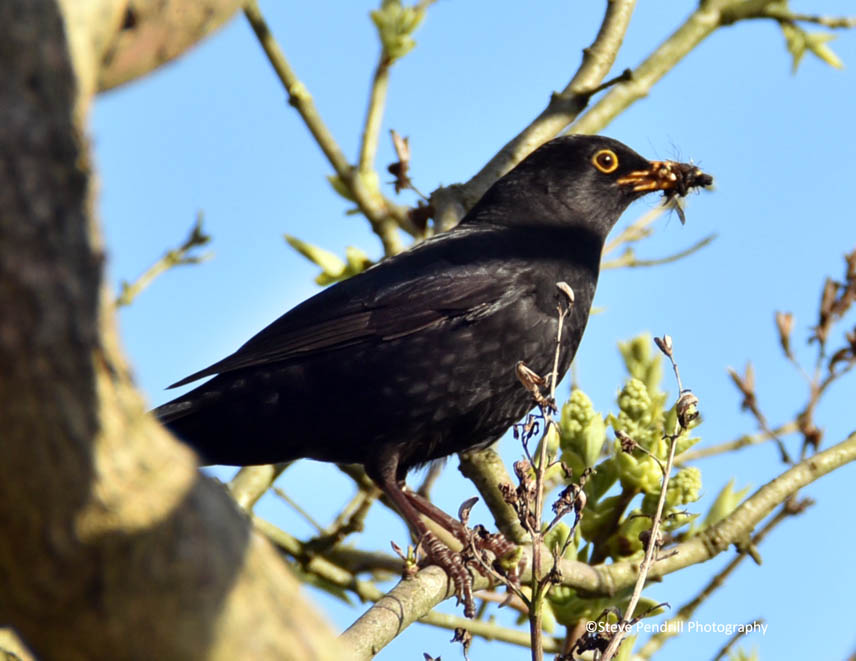 Male bird heading to the nest with food. 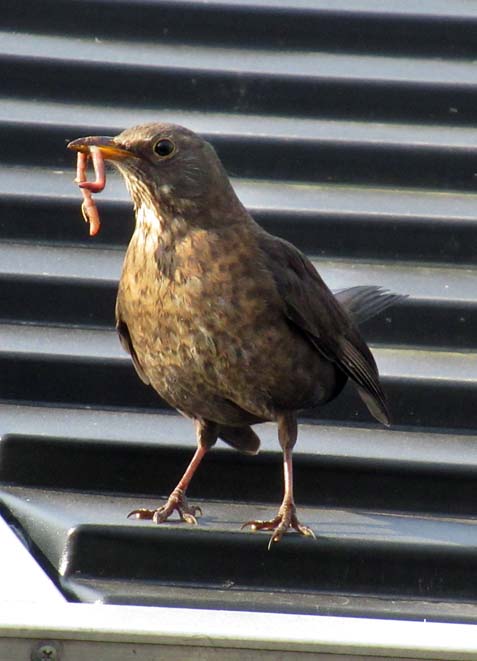 The mother bird returns with food.

The male blackbird is black (as opposed to brown) with a longer bright orange beak. He doesn’t seem to be very active until the chicks demand for food becomes a two-bird job. The nest is now left rarely more than a few minutes as the parents alternate the feeding. Presumably, the male bird’s job in the early days is about looking out for imposters. Blackbirds are fiercely territorial and squawks and screeches warn off other approaching blackbirds (and warn of a nearby cat!). 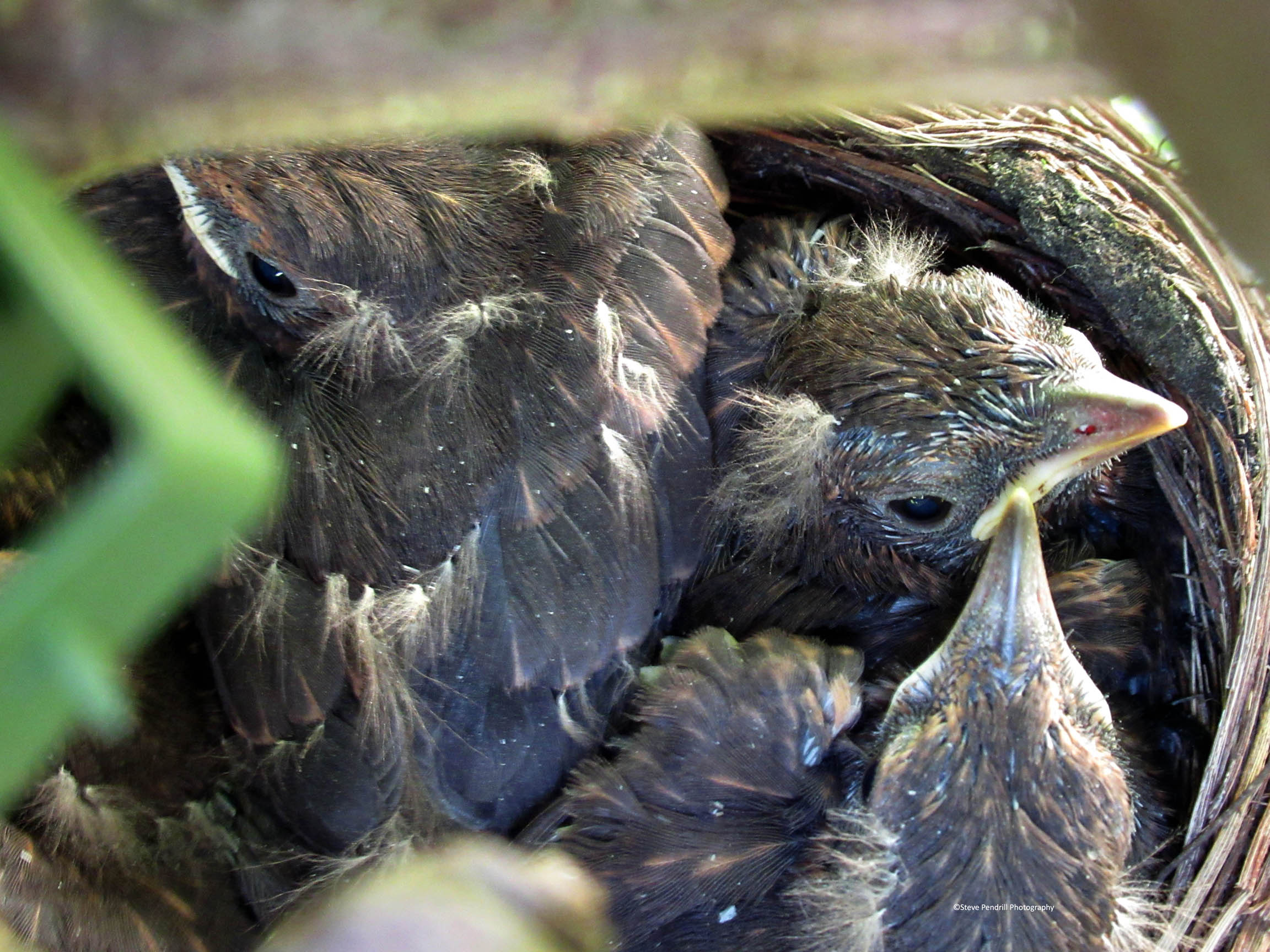 Growing chicks in the nest, nearly ready to leave.

A few days on and the birds’ feathers are already well developed and the  nest is starting to look distinctly crowded. The young birds are becoming more active, restless and inquisitive. 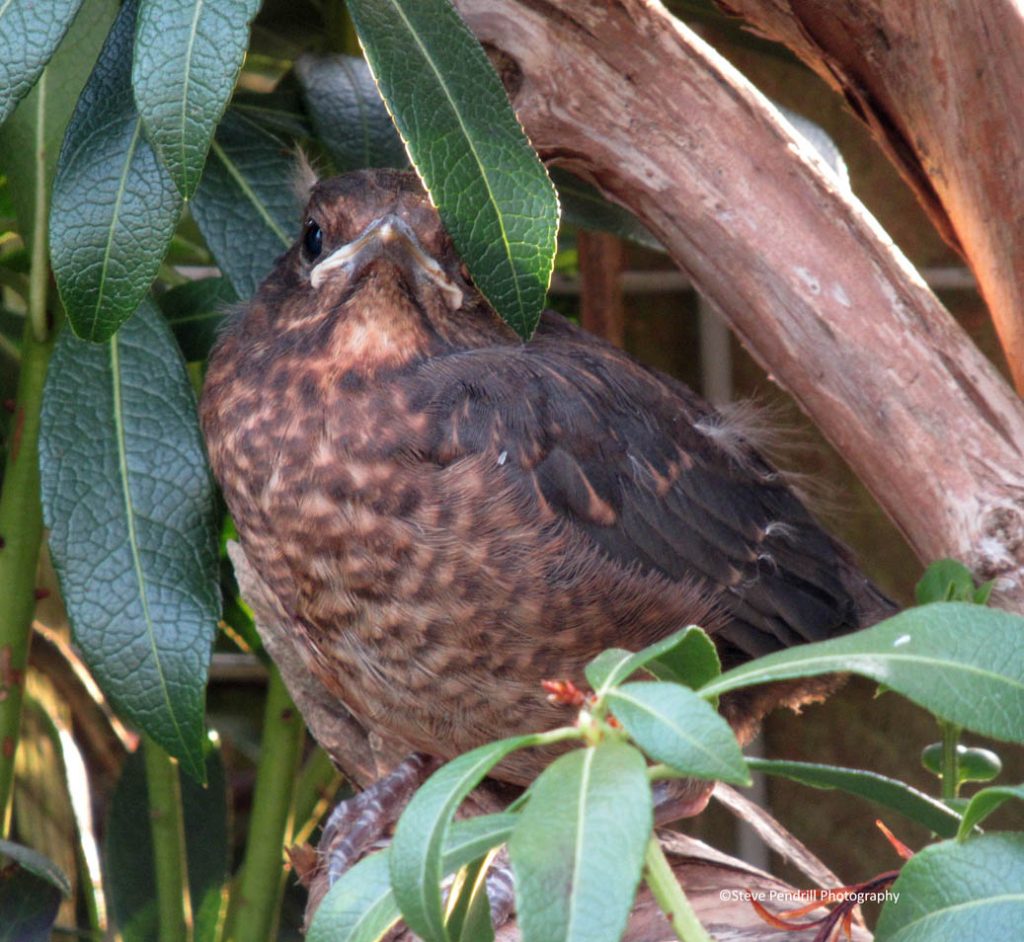 Out of the nest.

Just three days later and the birds have all vacated their nest. Sadly from my perspective, they hopped off into neighbouring gardens and all I could snap was one shot of one of the young birds in the hedge. The parents were still very busy back and forth with food and sightings of the youngsters had become scarce. 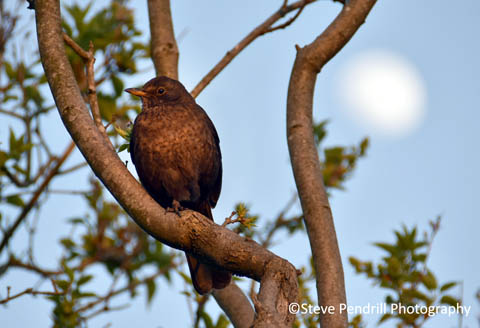 On my last photo, my aim was to have the blackbird against the moon, but before I could reposition myself and change the camera’s depth of focus (to make the moon clearer) she flew off. A case of almost a great shot. It was tempting to Photoshop in a sharp image of the moon, but I’m too honest for that!

I hope you have enjoyed my nest photography and a personal story of nature in action. More coming soon…