Being one of only a very small number of Westerners in Manila, I felt rather self-conscious taking pictures of the locals. Thankfully, my 200mm lens and newspaper background come in handy.

Favorite pastime with Manila locals, sleeping is about all you can do in the heat. Maybe with a Spanish influence too, anytime and anywhere is good for a ‘siesta’!

Getting around the city’s congested streets is mostly done by the hundreds of  the Philippines colourful icon of transport, the ‘Jeepney‘. It’s an old style jeep-com-minibus with is usually packed full of passengers, sometimes hanging on to the outside or clinging to the roof- anything goes! The driver dodges traffic, collects fares and counts change  all at the same time. It’s an art to watch, great fun and extremely cheap way to get around town and rub shoulders with the locals!

Manila, is a sometimes disturbing mix of abject poverty, pollution and crime, existing beside affluence, expansion and success. A country of the ‘haves‘ and the ‘have nots‘, where corruption is the shameful norm which the government is working to eradicate.

Getting around by motorbike; nearly everyone seems to own one. No helmets and snack in hand. Health and safety take a back seat!

Unsurprisingly, with so much of it around, many Filipinos live off the sea and these curious little boats are everywhere. 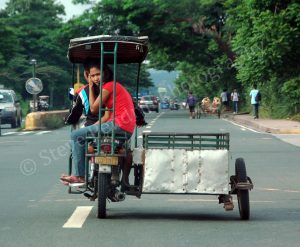 Customised motorbike for two, adapted to carry almost anything.

NEXT TIME in my travel photography series, I leave the hustle and bustle of Manila behind and head into the mountains for some fresh air and to visit an active volcano!