I was determined to witness part of this historic occasion and took a brief to London for the Trooping The Colour on The Mall. Enjoy my selection of photos and apologies for any inaccuracies in the captions. 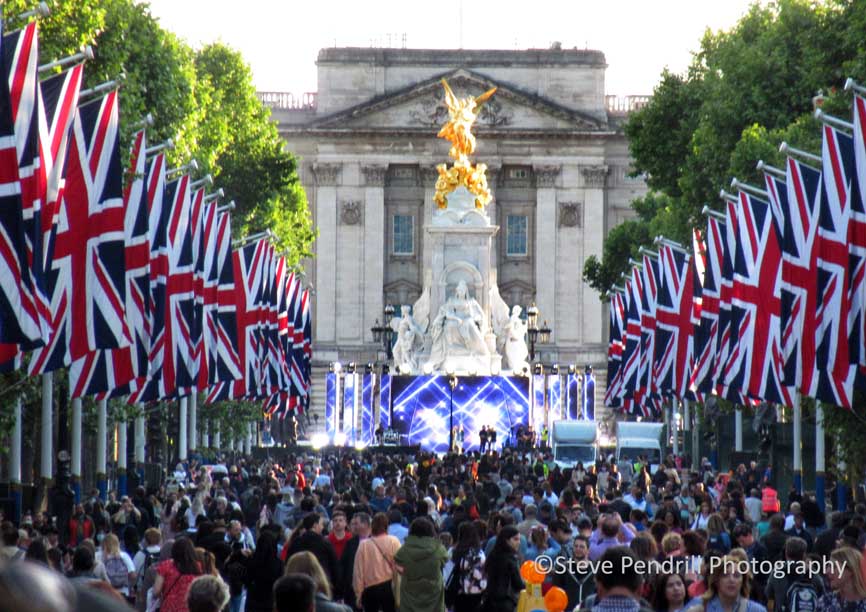 The evening before; The Mall and Buckingham Palace. 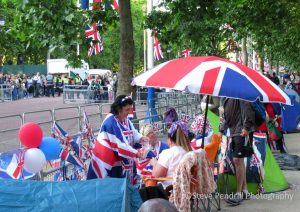 Camping out on The Mall.

The real Royal enthusiasts got a front row view for the following day’s parade. I had a comfy hotel at Docklands! 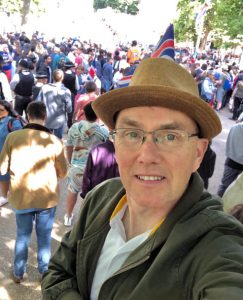 In position and ready!

The first job, apart from getting up very early, was to find a good viewpoint. I felt that height was more important than being very close. I managed to find some railings I could stand on. Just enough to see over the top of everyone between me and  the parade. Distance was then down to a good zoom.  With hindsight I wish I had taken my bulky DSLR camera rather than the handy compact camera that I chose, as image quality would have been better. I had a clear unobstructed view though and I liked the backdrop on the other side too; a wall of faces, where people had crowded rows of steps. I also considered the direction of the light.  I didn’t want silhouettes against the sun. I was all set but had a long wait of a couple of hours…. 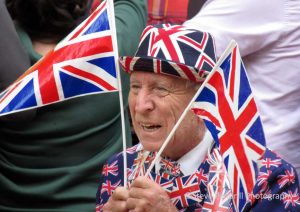 From my viewpoint I watched as the crowds gathered and snapped a few shots of the more striking faces I could see near me! 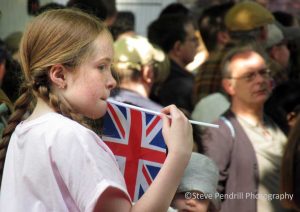 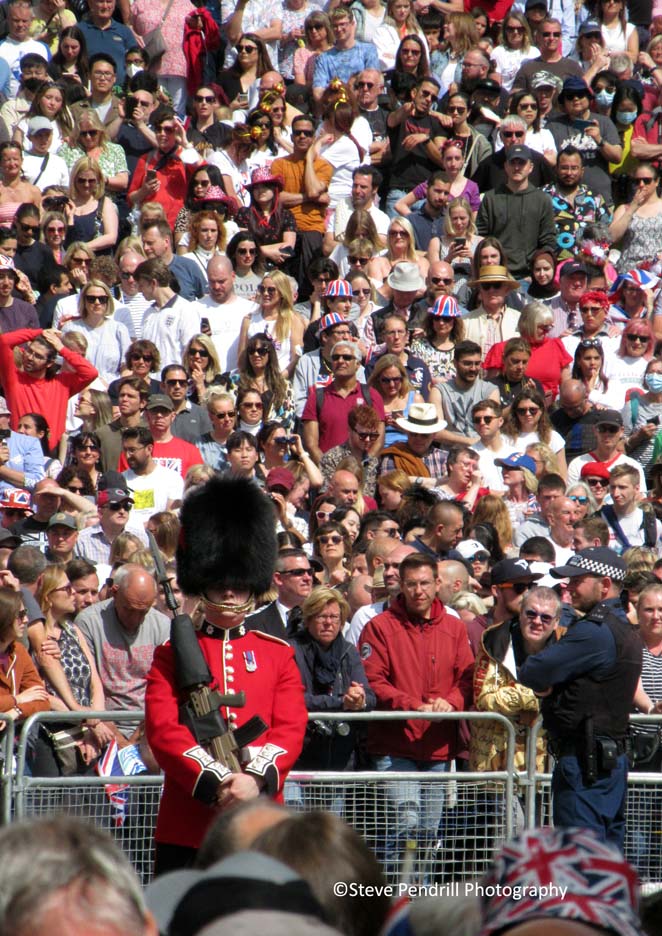 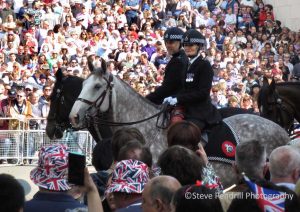 Mounted police were the first to pass. 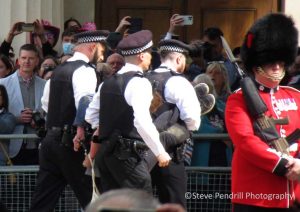 Protesters were quickly carted away by police, to boos from the crowd.

There was a brief moment of drama, as a group of protesters, who leapt over the fencing in front of the parade further up The Mall were taken away by police. 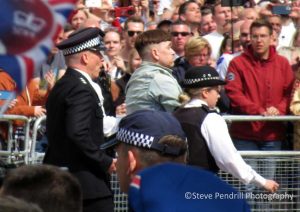 One of the protesters is lead away. 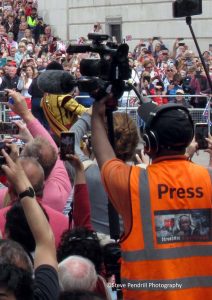 One of the many press cameramen in the crowd in front of me.

I felt rather envious of the press photographer positioned a short distance away from me. Had I been ‘on business’ I could have had a prime position. Interesting that he chose a similar spot to me, albeit further forwards on a step ladder. Great minds think alike! 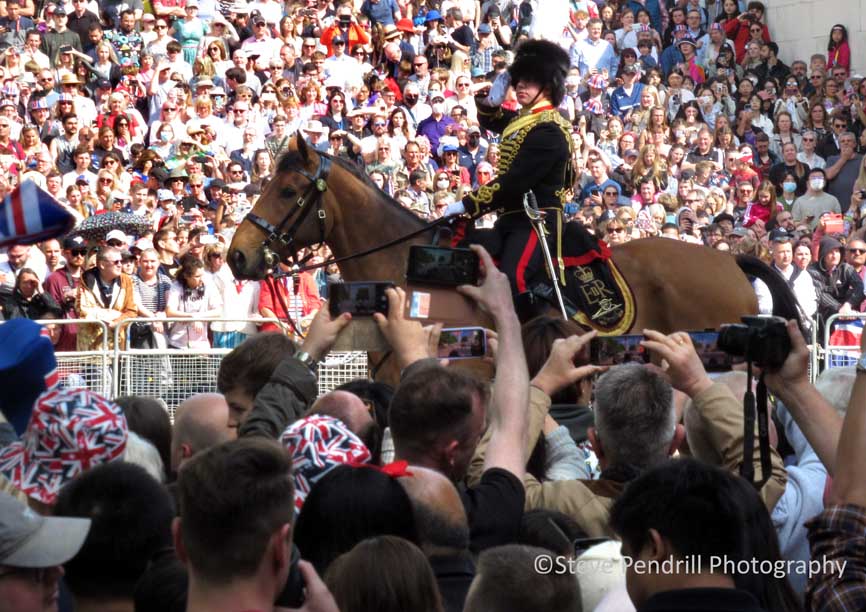 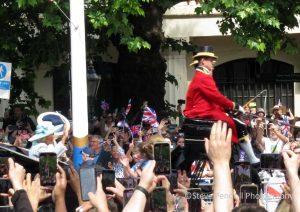 The first Royal I spotted was Camilla, the Duchess Of Cornwall. 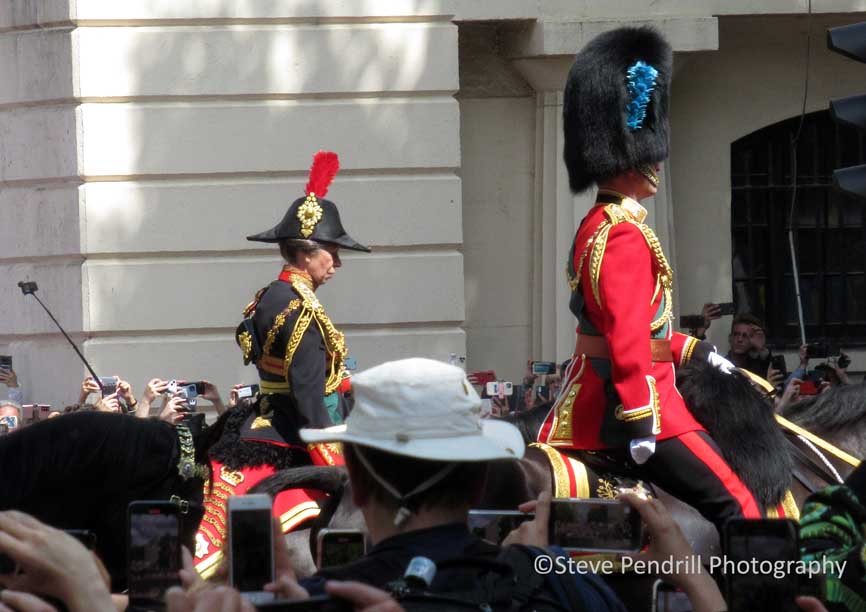 Spotting and identifying the Royal family, especially when they were on horseback wasn’t easy. Headwear obscured faces and military uniforms were much duplicated. On top of that I had a fairly small clear window of view and they passed quite quickly. On the other hand, the parade passed twice, so you at least had a second chance to snap a good shot. 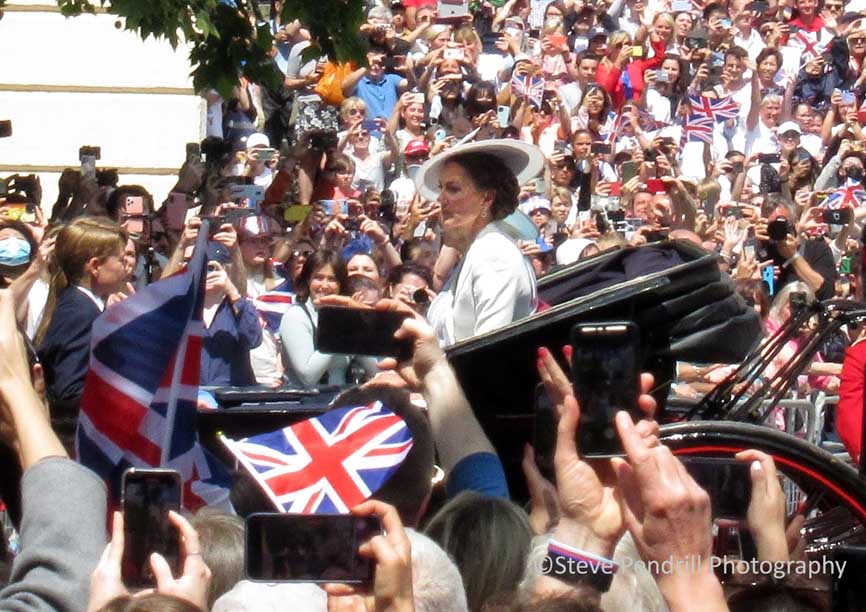 Kate, Duchess of Cambridge looked lovely in her carriage, opposite Prince George. 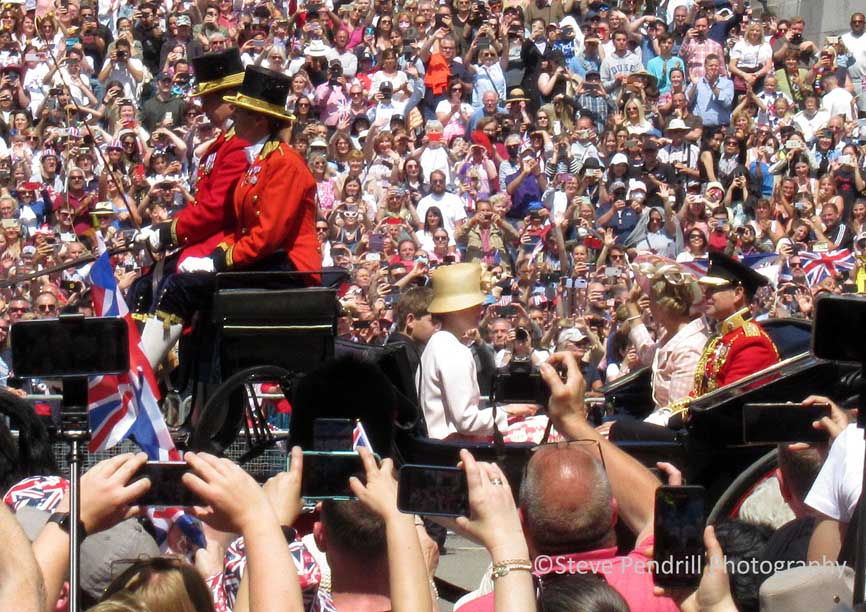 Duke & Duchess Of Wessex and their family. 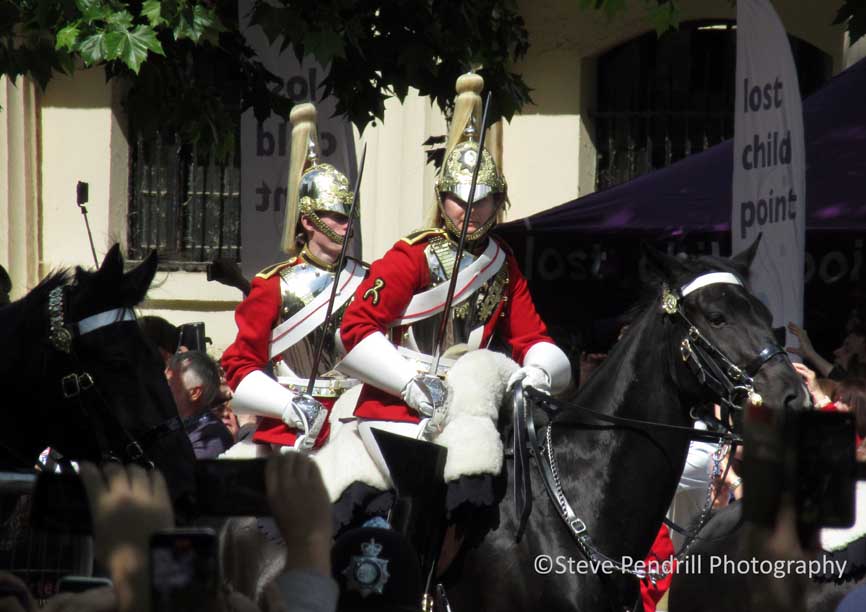 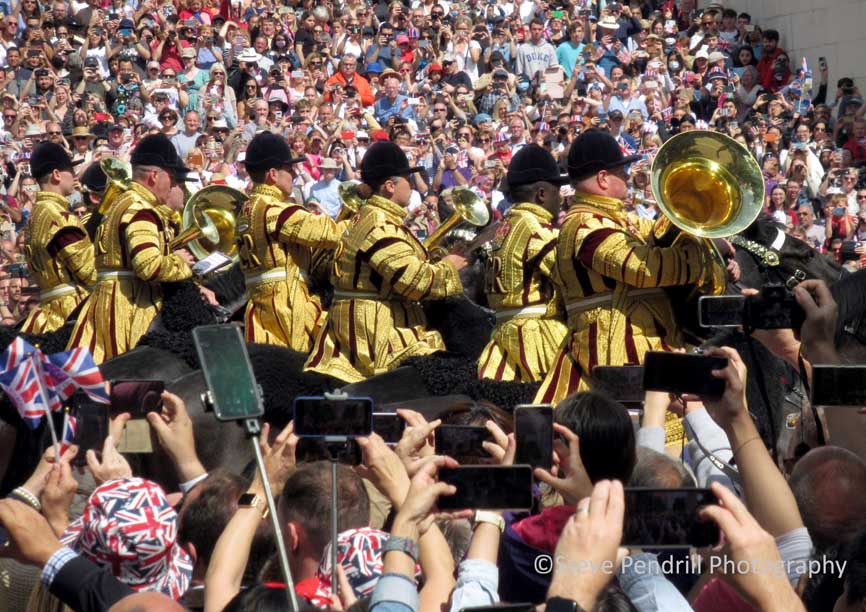 In gold, the Royal Artillery band (I think) made a striking sight. 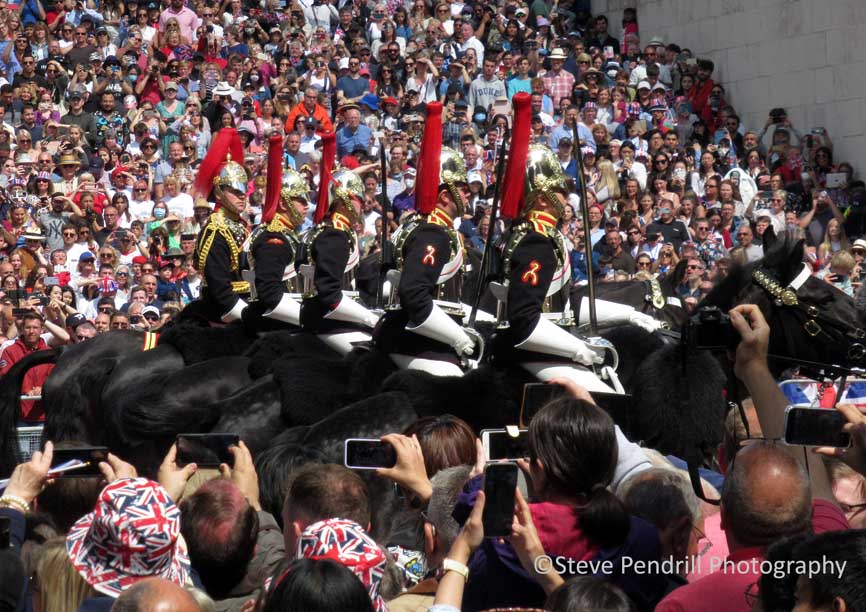 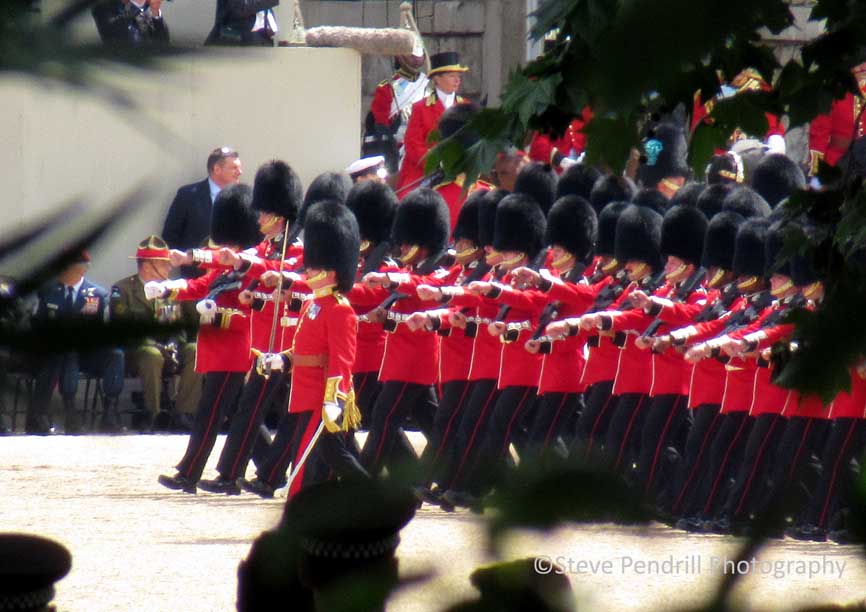 Through the trees; Trooping The Colour ceremony.

The actual Trooping The Colour ceremony on Horse Guards Parade was a ticket only event, but from my fence-top perch I managed a tantalising glimpse of the action through the trees. 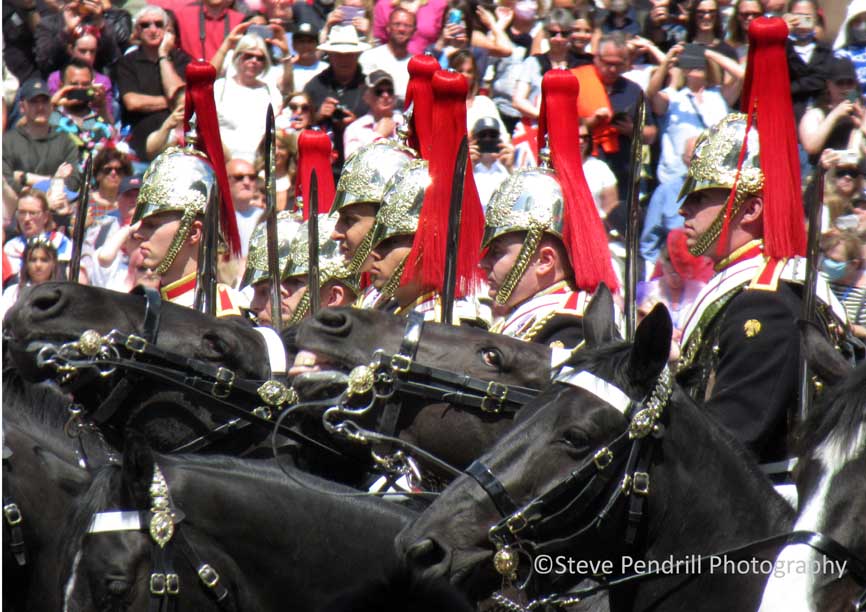 Blues & Royals on the march. 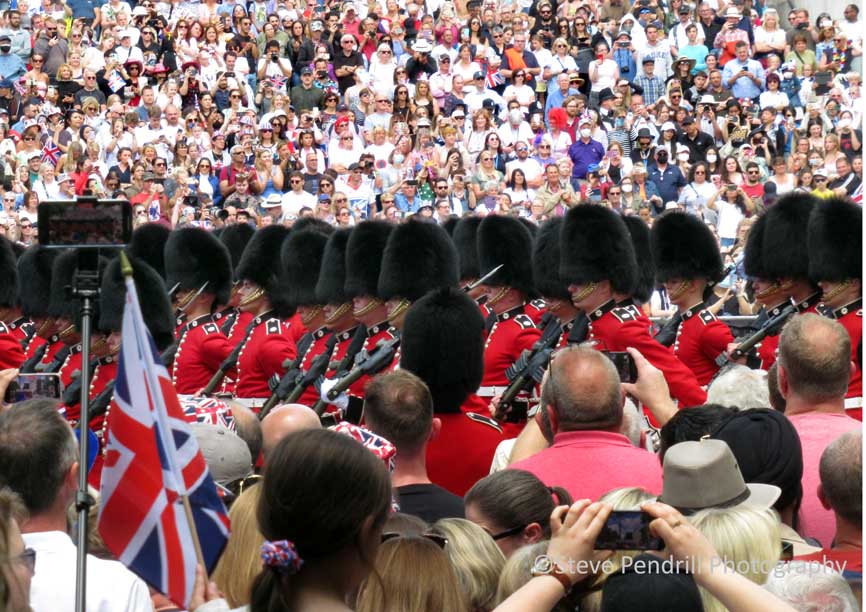 Unmistakeable in their bearskin hats, the Scots Guards. 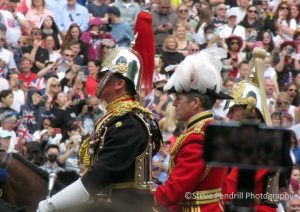 Officers on horseback head back to the Palace. 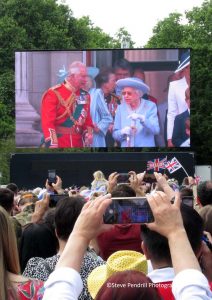 The Queen & Prince Charles on the Palace balcony. 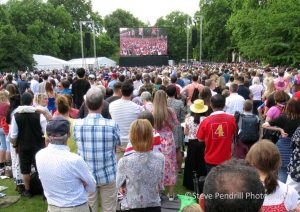 Hoards gather in the park. 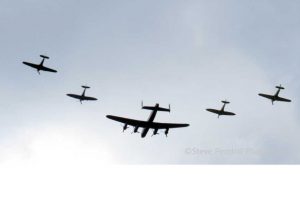 Lancaster Bomber and spitfires overhead for the Battle Of Britain Memorial flight. 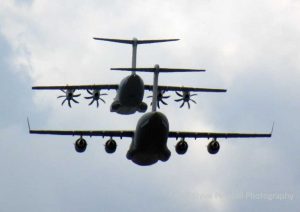 Striking sights in the sky over London.

With all the processing up and down The Mall over, the best place to see the Queen and members of the Royal Family on Buckingham Palace balcony was in front of the giant screen in St James’ Park. It was a touch disappointing not to get any closer to the Palace, but there was a great atmosphere in the park as we waited for the flypast. Many military aircraft old and new including an impressive ‘70‘ formation completed the day’s celebration. The finale was the famous Red Arrows, which I managed to capture right overhead. 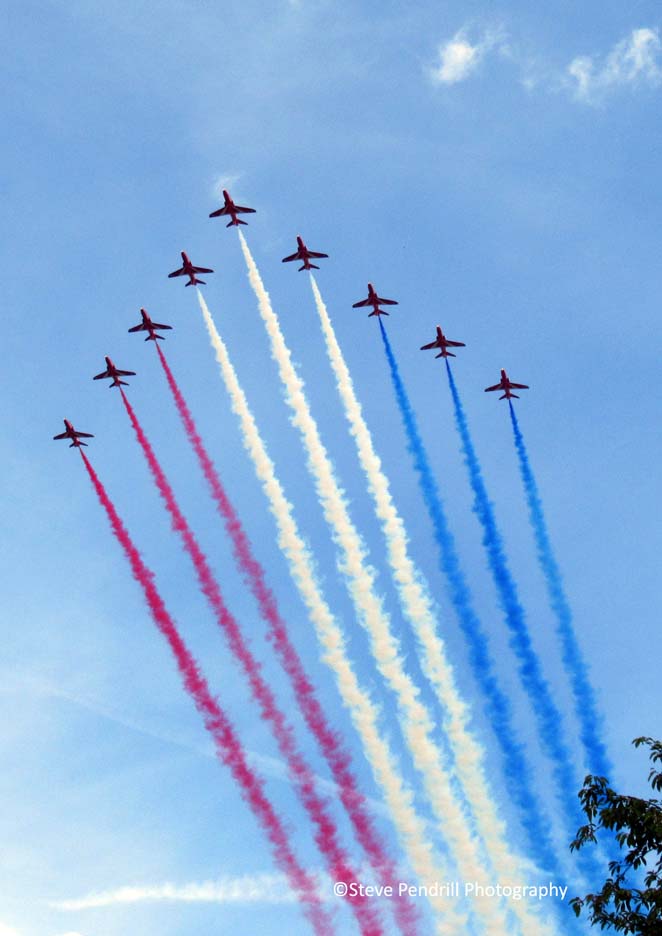 Wonderful sight; the Red Arrows were the finale 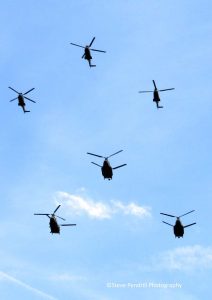 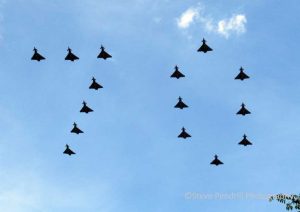 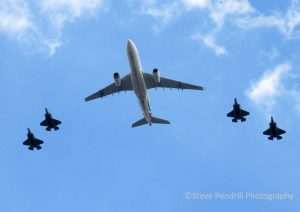