Having recently wrapped up the last work from my busy wedding season, I quickly treated myself to a hastily arranged short city break in the lovely and very accessible city of Belfast. My main aim was to take in the much revered Titanic Experience museum, the city’s best known tourist attraction.

I saved this snap (above) of this wonderfully evocative piece of modern architecture until I left the museum at dusk; often the most exciting time of day for shots of buildings. 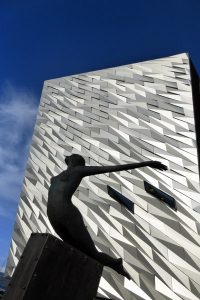 A little earlier in the day I was mesmerized by the statue silhouetted against the shimmering facade of the museum frontage catching the sun. Thank you weather for giving me sunshine and a striking blue sky to add colour and contrast. The museum itself was at least a half hour visit with so much to experience. One of my highlights was standing over a giant image of the Titanic wreck.

Wreck of the Titanic.

Outside the museum itself there’s lots to take in, not least the SS Nomadic. This was Titanic’s tender and the world’s sole surviving White Star Line ship. It was remarkable to think that passengers (at Cherbourg) boarded this vessel on their way to the doomed ship, many of them not to return. They would have passed through this beautifully ornate Victorian wrought iron gate. 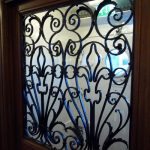 Moving back into the city from my nautical start, I took time to explore this lovely city and discover one or two architectural gems with my camera.

Surely Belfast’s best know landmark is City Hall. My evening shot captured the dramatic floodlighting. I  chose to snap the side rather than front of building (see top left) for two reasons; to avoid a busy  road in the foreground with traffic lights, bins and distracting street lights and also the  people pouring into the brightly lit Christmas Market. The market was great by the way, but not something I wanted to distract from my shot of the building. Most certainly good subject matter for a photo feature on another visit. 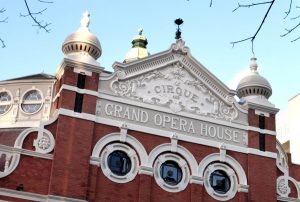 The Opera House was I felt well worthy of a photo and admiration before just across the street the Assembly Rooms caught my eye, and in particular this rather ornate tower which the low winter sunlight had put a spotlight on. 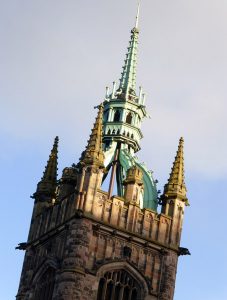 Gothic tower on the Assembly Rooms.

My next photo opportunity was very close by, in fact just a few doors up.

Somewhat annoyingly I can’t confirm what this building is. I think it is a college, but I just loved it and how the sun falls on it.

Sunset over the Irish Sea.

Taking an afternoon away from the hustle and bustle of Belfast, I jumped on the Stena Line ferry to Scotland the next day. It’s just 2 hrs 15 mins on one of the largest and most luxurious ferries I have traveled on to date. Certainly not the shortest route to Scotland if you fly to Belfast first, but a lot of fun and more photo opportunities!

I have a soft spot for a nice sunset and I was blessed with a lovely one for my return crossing, shot mid Irish Sea from the top deck. Don’t the clouds look so dramatic and a contrast with the late glow from the sun. I particularly liked (if you look closely), the heavy shower happening on the distant horizon and the silhouette of distant land (Ireland). It’s a ‘weather story’ photo.

View from my flight.

My final photo comes from well above the Irish Sea on my flight home to Liverpool. Clouds fascinate me, especially from above and despite a dirty window to try to shoot through, I did like the effect of the sun shimmering off the sea and the shadows created by the clouds above.

I hope you have enjoyed my brief trip across the Irish Sea. I strongly recommend Belfast and Northern Ireland, either by air or sea as a great short (or longer) break. Wonderful architecture, rich history, very friendly people and lovely scenery.